Things To Do On Mackinac Island

This post was most recently updated on October 17th, 2019

Where Is Mackinac Island?

There is never a shortage of things to do on Mackinac Island. The island is located 4.8 kilometres off the main land of Michigan in the calm waters of Lake Huron between Michigan’s Upper and Lower Peninsulas.

On this 13 kilometre island you’ll see a combination of dense forests, limestone caves that are home to many bats, steep rouged cliffs, and unique rock formations dating back hundreds of years. 80% of Mackinac Island is preserved as the Mackinac Island State Park. 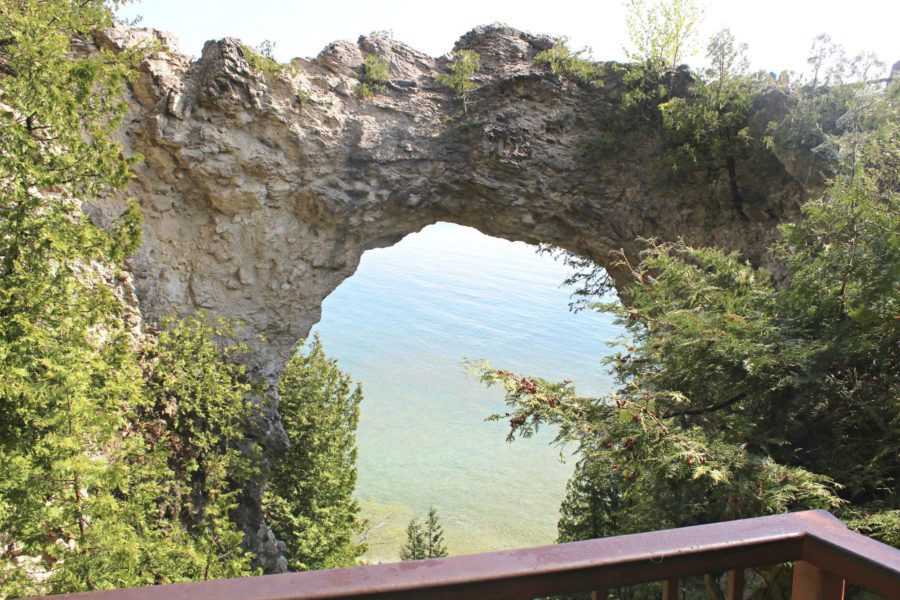 May to October is the best time to go to Mackinac Island. July and August will have the warmest weather. But it’s also school break and the prices rise significantly.

The winters on the island can be frigidly cold though. And a lot of the business’s shut down. Plus the only way to get there would be by snowmobile or flying into the Mackinac Island Airport. Yes the island actually has an airport! 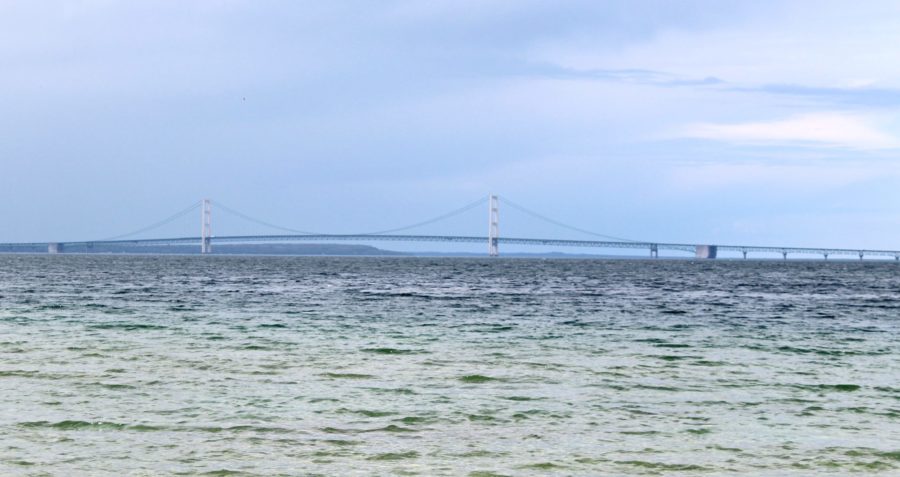 How To Get To Mackinac Island

The most common way to get to Mackinac Island is by taking a Mackinac Island ferry.  You have two options for getting on the ferry. Either from the city of St. Ignace or from Mackinaw City. We like to take the ferry from St. Ignace since you have to cross the Mackinac Bridge to get there. The Mackinac Bridge is something to see itself. At 26,372 feet long, it is the largest suspension bridge in the western hemisphere. 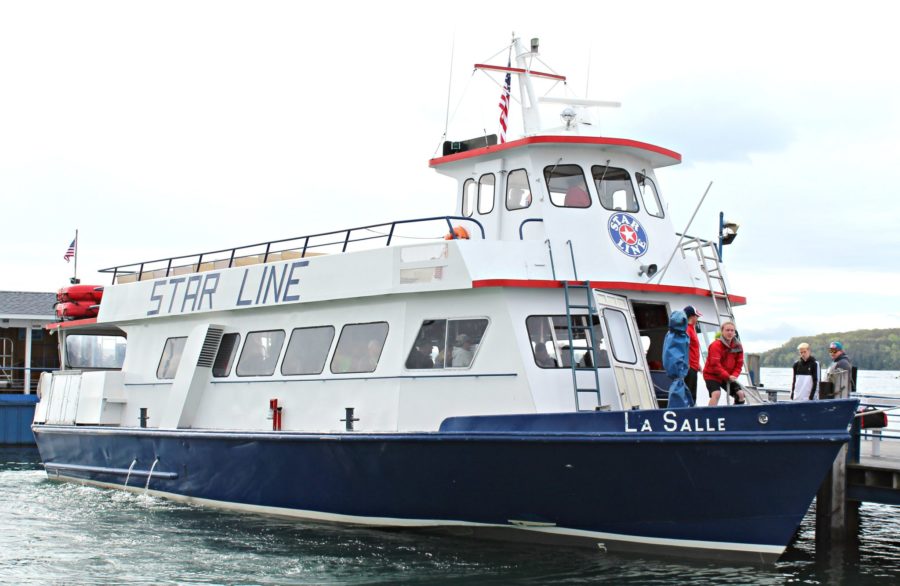 The ferries run from April 19th until October 31st. A Mackinac Island ferry ticket round trip for an adult will cost you $27.00. Or if you buy your tickets online a head of time they are $25.00.

*Here you will find exact times for Sheplers ferry schedule.

We chose the Star Line ferry’s fast hydro-jet ferry over to the island. It’s a really quick 15 minute ride. You’ll get a great view of the Mackinac Bridge from the water on your trip over to Mackinac Island.

The first thing you notice when you get off the ferry is that there are no cars on the island. Your only means of transportation is either walking, cycling or taking a horse and buggy.

As soon as we arrived in this quaint victorian looking town, we knew we were going to love it. 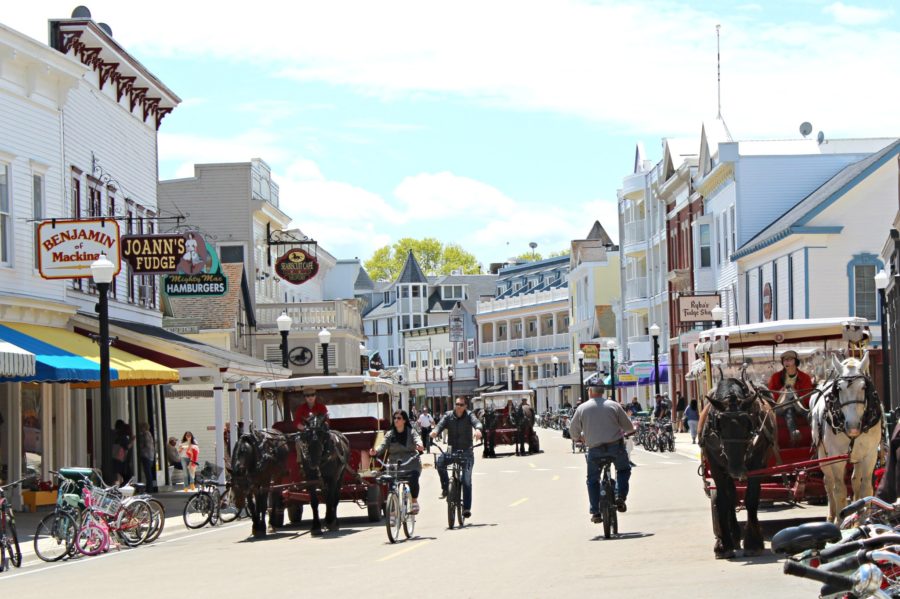 It’s one of those places that you say “If I ever win the jackpot, I’m buying a house here”. During the summer the town skyrockets from a population of 523 permanent residents to 15,000 visitors a day. 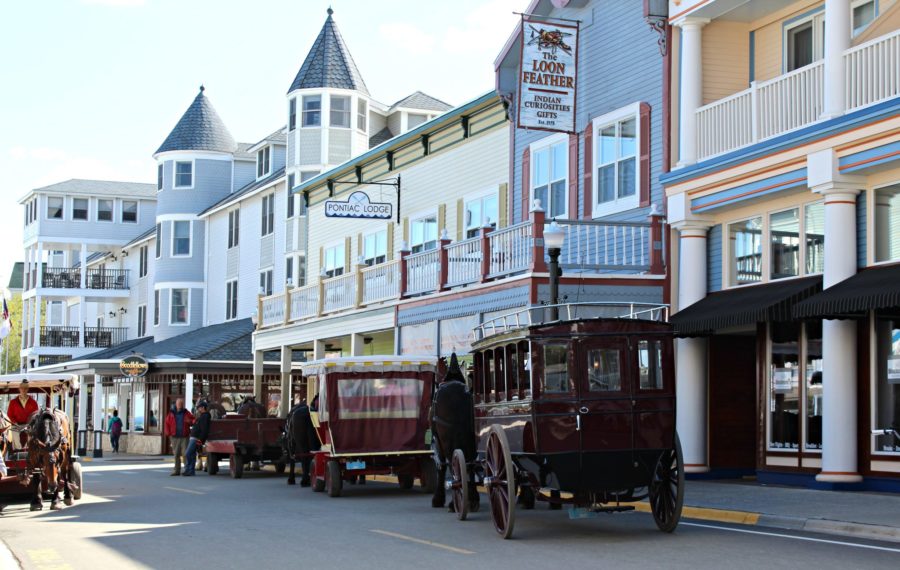 What To Do On Mackinac Island

The main mode of transportation on the island is a bicycle. I think everyone owns a bike or two here. Tourists can either bring their own over on the ferry for an extra $10, or rent one on the island. There are plenty of Mackinac Island bike rental companies to choose from. All charging around $8 an hour, or $55 for the day. 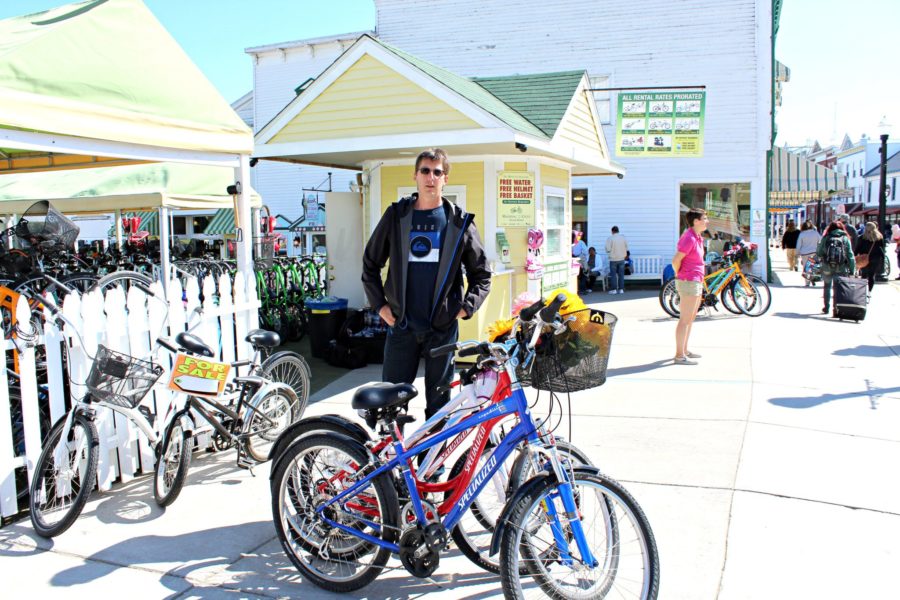 It’s a great way to get out of town and see the whole island. There are over 70 miles of paths and trails to bike on. With the distance around Mackinac Island being only 13 kilometres, it’s an easy couple hours trip. Just pack a picnic lunch and stop along the water to take in the view.

If bicycling isn’t your thing, there are other options to get around like hiring a carriage. Or if your brave enough you can drive your own buggy. There are also stables to rent horses. 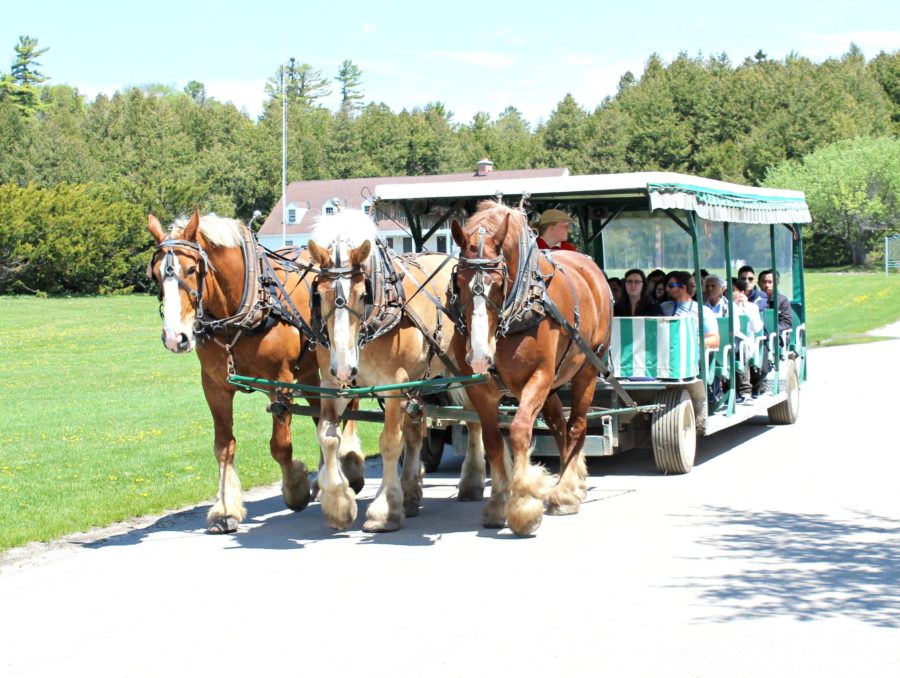 The island has a few historical walking tours to choose from. I love how all the houses were built in the Victorian style. Some even look like giant doll houses.

Mackinac Revealed -offer a two hour history and culture walking tour. The cost is $36.00 for adults, and it’s strongly recommended to book ahead of time.

Mackinac Island Legends And Lore Trek– this tour is a 5 kilometre hike through the Mackinac Island State Park. Cost is $10 and you need to reserve a spot ahead of time. 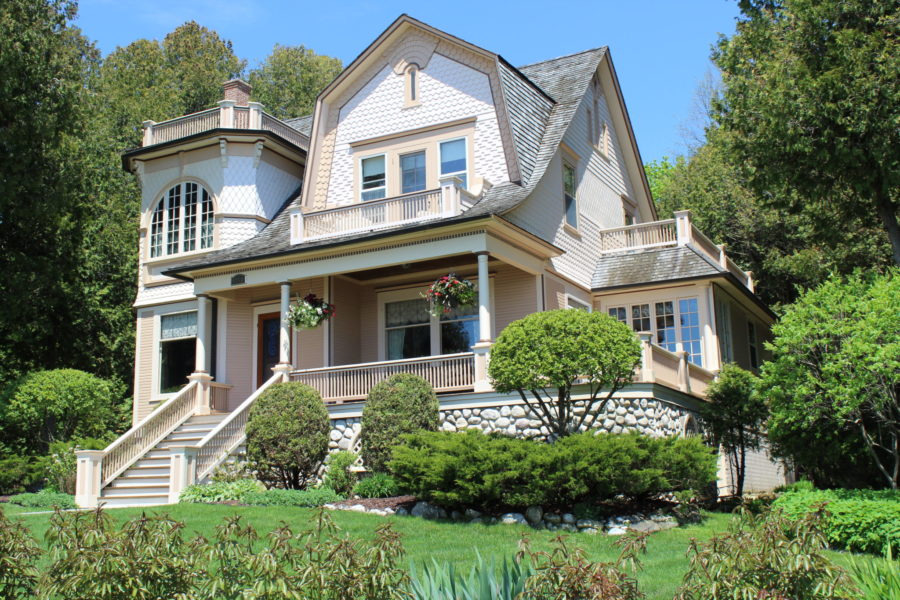 This island has a lot of history for such a small place. Fort Mackinac was built in 1782 by the British during the American Revolutionary War. And later became the battle ground for the war of 1812. You can explore Mackinac Fort from May to October at a cost of $13.50 for adults. Every day you’ll be able to see a historical reenactment take place. 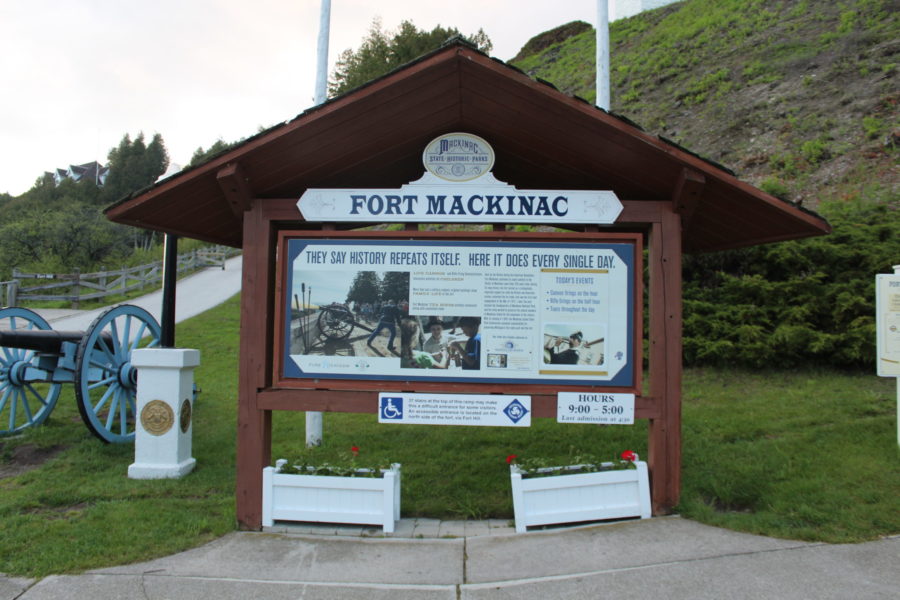 Take a tour of the Original Mackinac Island Butterfly House. This butterfly house started in 1991 by a man who decided to add butterflies to his greenhouse. Years later it has evolved into species of butterflies from all over the world. Costs for adults is $12.00. 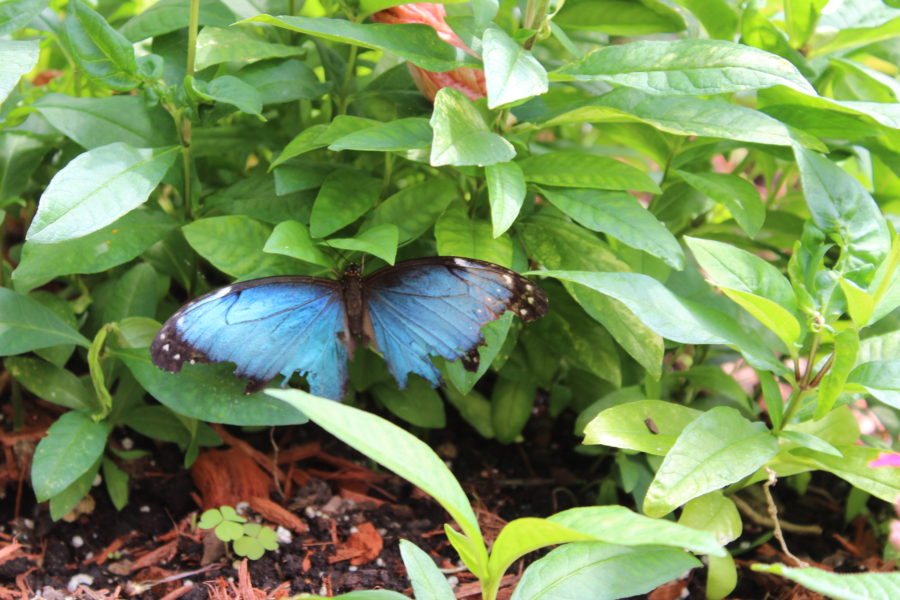 Every year around the beginning of June there is a lilac festival on the island. It goes for over a week with special activities going on each day. You’ll be able to get lilac infused drinks, witness the crowning of the lilac festival queen, and go on a lilac walking tour among other things.

Best Places To Stay On Mackinac

Although Mackinac Island is mostly a State Park, camping is not allowed on the island. But there are plenty of other options. Just make sure to book as far a head of time in the summer since it’s a very popular summer resort destination.

One of the most famous hotels is the Grand Hotel. This hotel first opened in 1887 and has been a popular place to stay ever since. Even if you don’t want to splurge for a night here (rooms start at $460 a night), it’s worth it to bike over for a look. Non guests can dine in one of their restaurants, or relax with afternoon tea in the parlour.

We stayed at the Murray Hotel located on the Main Street, and just a short walk from the ferry. They have various room options available. Our room was barely big enough to fit the bed, and the bathroom was in the closet. But considering the price, it was adequate for a few nights. There are other larger suite options available if you want to pay more. 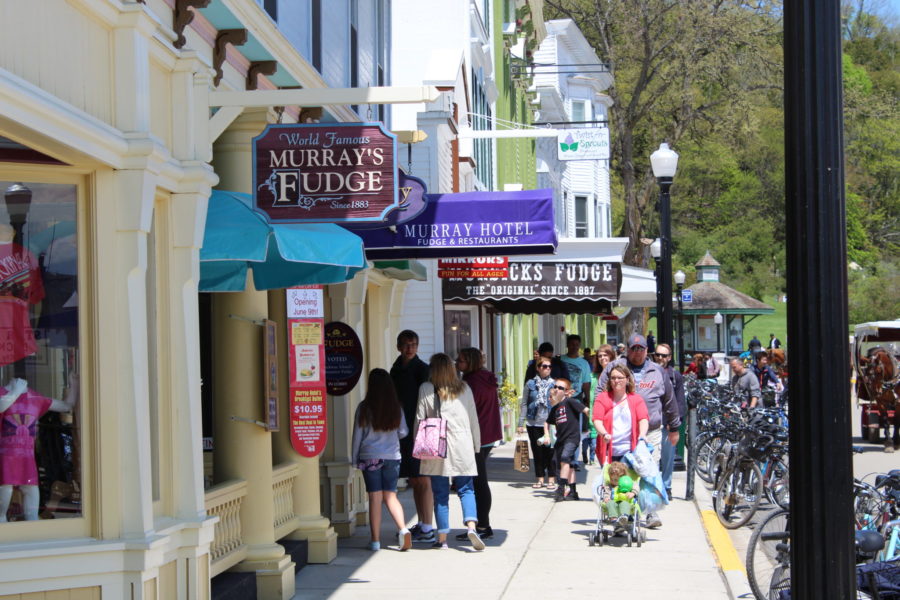 I would pass on their breakfast offered though, unless it’s included in your rate. There are better options to be found on the street. My favourite thing about this hotel is their nice over sized hot tub and deck to relax on. 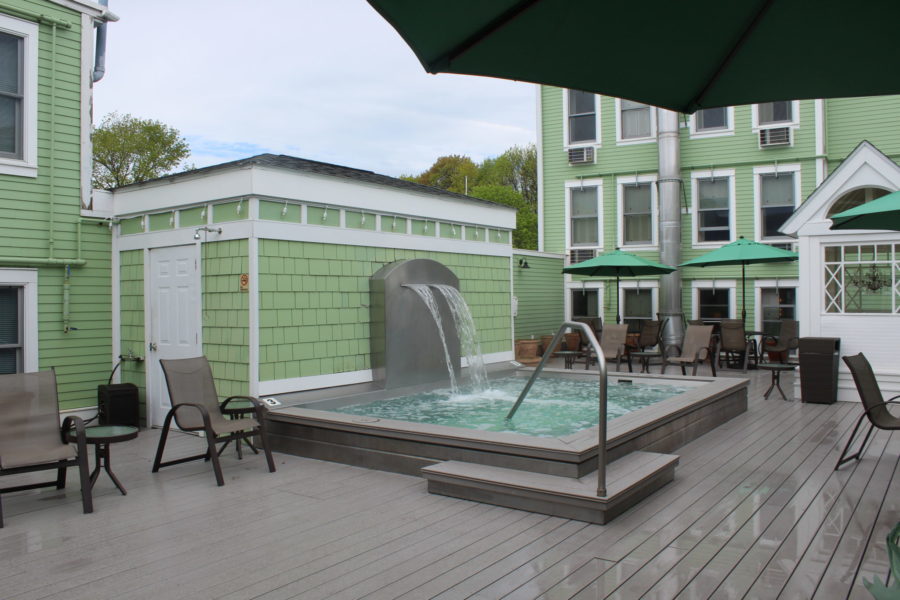 The Windermere Hotel was built in 1887 and has been in the same family for over 100 years. It’s in the perfect location to watch all the boats go by  from the Mackinac Island harbour. The hotel has 26 rooms, all with no TV’s. And offer a continental breakfast to their guests. 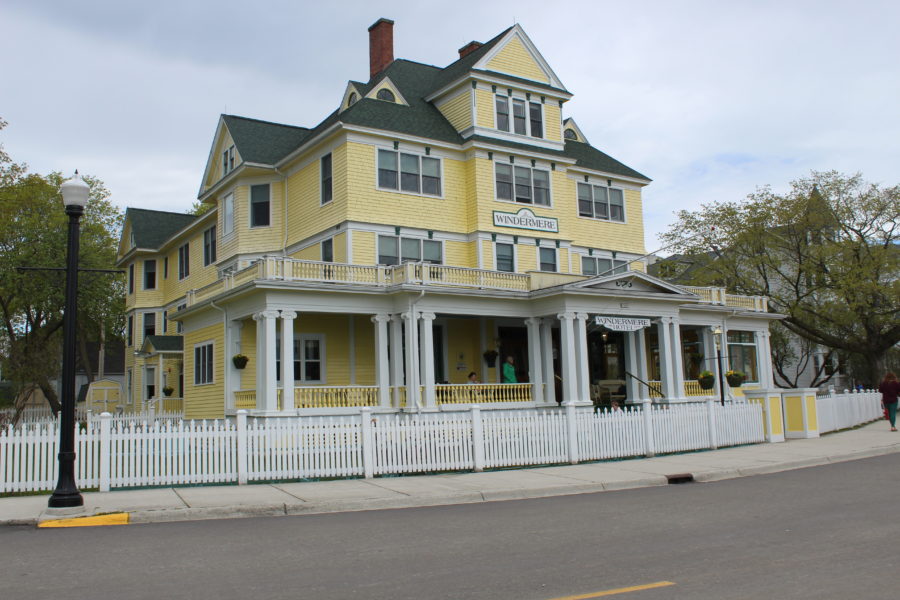 The Inn on Mackinac was built in 1867. It features a spa pool, and warm chocolate chip cookies at bedtime. It’s at the perfect location on Main Street to watch all the horse and buggies going down the street. 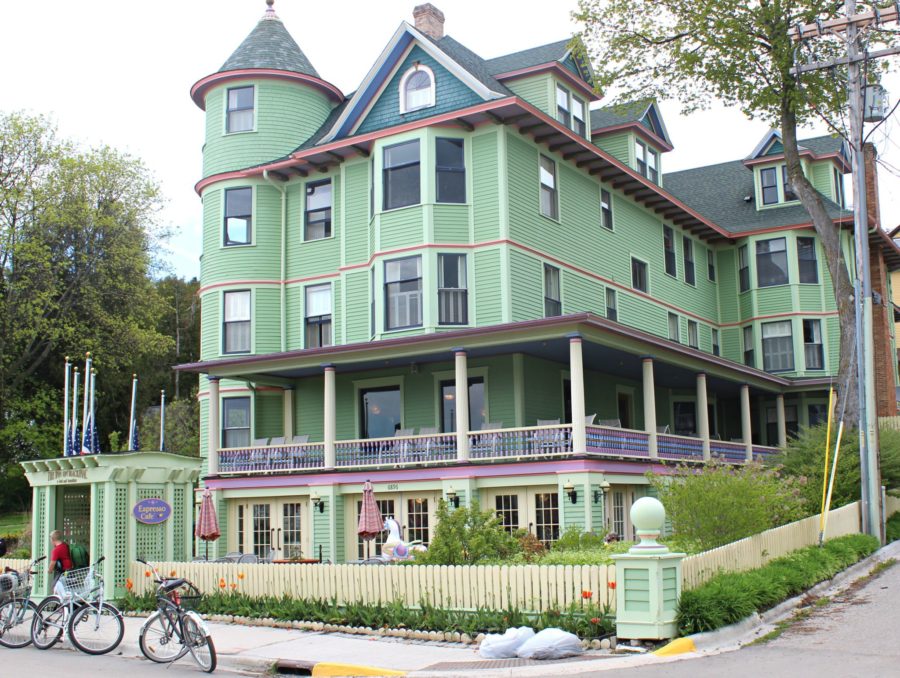 There are quite a few restaurant options for this small town.

Horn’s Gaslight Bar and Restaurant – This was one of our favourite places to go for dinner. They serve a lot of Southwestern type food like quesadillas, burritos and fajitas. And after 8:30 each night they have live entertainment.

The Pink Pony – was another very popular restaurant. Although we never ate there, it was packed every night. They also had nightly entertainment with musicians playing.

The Seabiscuit Cafe – We ate here for our second night and loved it. The cafe was named after the famous race horse. Their menu consists of things like the derby burger and the triple crown sandwich. We found the prices to be very reasonable too.

Tip:  Don’t forget to pick up some fudge before you leave. The island is known for its fudge. And there are tons of fudge shops selling pounds and pounds of fudge every day. At each one you can see a demonstration on how its made.  Then try some of their free samples.

London To Bath Trip: How To Save Some Money

A Scenic Drive Through The Northern California Coast